20 nominations for the Goya awards for films from Guipuzcoa 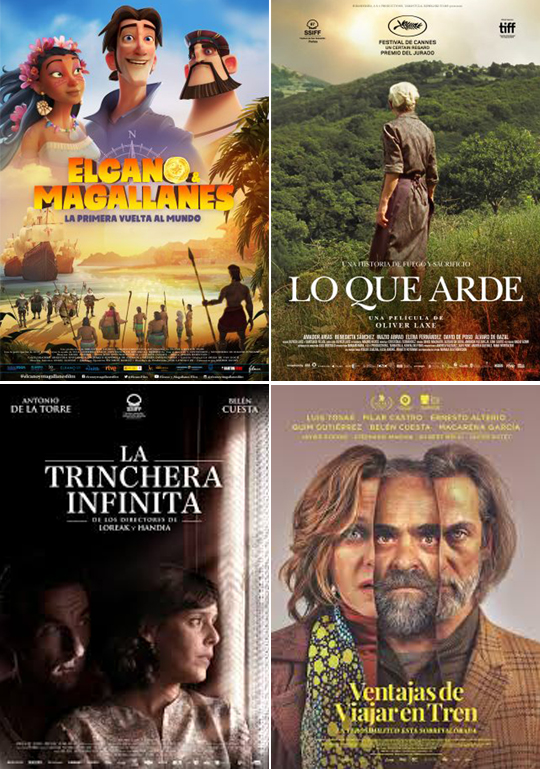 Fifteen of these are for ‘La trinchera infinita’, by Aitor Arregi, Joxe Mari Goenaga, and Jon Garaño, the directors of ‘Handia’, another four are for ‘Ventajas de viajar en tren’, by the director from San Sebastian, Aritz Moreno, and the last one is for ‘Elcano y Magallanes, la primera vuelta al mundo', by the animation studio, Dibulitoon.

The other Basque film that has also been reflected in the nominations is 'Ventajas de viajar en tren', directed by Aritz Moreno, who has obtained four: best new director (Aritz Moreno), screenplay (Javier Gullón), art direction and make-up (Karmele Soler & Olga Cruz). This film was also shot with support from the San Sebastián-Gipuzkoa Film Commission.

Another film from Guipuzcoa appears in the best animated feature film category: 'Elcano y Magallanes, la primera vuelta al mundo', by the Dibulitoon studio, a feature film lasting about 85 minutes, which is aimed at a family audience and children from eight to twelve years of age.

These nominations for the Goya awards highlight the entire value chain of the local audiovisual sector, with nominations for films from Guipuzcoa in categories ranging from best screenplay to make-up and hairstyling, and including costume design or editing. It is quite clear that in Gipuzkoa there is a high level of concentration of top-quality companies and professionals in the audiovisual sector that are part of the local business fabric. Guipuzkoa is cinematic territory.

The City Councillor for Economic Development, Ernesto Gasco, pointed out that ‘these nominations are the result of the work carried out by companies from Guipuzcoa in the audiovisual sector that have attained the very highest professional level, and have created an ecosystem that is conducive to the development of significant projects”

The Gipuzkoa Provincial Councillor for Culture, Denis Itxaso, congratulated the directors, Jose Mari Goenaga, Jon Garaño and Aitor Arregi, on their “career with a rigorous approach to narrative” and the 15 nominations for the Goya awards that their latest film, ‘La trinchera infinita’, has obtained. Itxaso also congratulated all the films from Guipuzcoa that are competing this year for the 2020 Film Academy Awards.

Another film linked to Gipuzkoa through having won the San Sebastian-Gipuzkoa Film Commission Award this year which is also competing for the Goya Awards is ‘Lo que arde’ directed by Oliver Laxe, which has been nominated for four awards: best film, best director, best new actress and best cinematography. The film is also produced by Miramemira and the Guipuzcoan production company, Kowalski Films, run by Koldo Zuazua from San Sebastián.

The gala will be held on the 25th of January in the José María Martín Carpena Sports Centre in Malaga.